Stoicism is a philosophical doctrine that was first discussed by the Greeks. It teaches people to be in control of their negative emotions because one thing is for certain: we all experience them, and it’s important that we take charge of them. Stoicism has been known to be used in an educational framework as a way to teach children how to cope with hardship in a healthy way. This is done by teaching them how to develop inner calm so that they are prepared for anything that challenges them. For hundreds of years, educators used Stoicism to teach kids character development. They used the Stoic framework to train responsible citizens equipped to do the right thing, even when times got hard. What does “doing the right thing mean” The idea of moral agency is not taught in most schools, but it’s an essential part of being a Stoic. Agency is the ability to make decisions and act independently. It’s what separates us from the animals. Without it, we are just another cog in the machine: following orders, repeating actions blindly. In this sense, the agency is part of what makes life worth living.

We all know that in order to do the right thing we need to be able to decide what that “right thing” even is (along with other things like having courage and resilience). Without agency, we can never go beyond our basic instincts and fulfill our potential as human beings.

1. Courage: is the bravery to face adversity. It doesn’t mean we’re never scared, but that when we’re scared, we decide to take action instead of run away.
It’s the will to press forward, put our heart on the line, and our skin in the game.
2. Temperance/Moderation: Courage is wonderful but we go too far when we take unnecessary risks. It’s a spectrum: cowardice on the far left, recklessness on the far right, courage in the middle. We should be brave, not fearful, but we should also avoid foolishness—that’s temperance.
3. Justice: For the Stoics, justice is the highest virtue. It means that we exist for the sake of others, not ourselves. Everything we do should contribute to the good of society. We must treat others the way we want to be treated and act with honesty, respect, and fairness.
4. Wisdom: Wisdom means making our philosophy work in the real world. What’s the right amount of courage? How do I act with justice in this situation? Wisdom helps us answer these questions, turn our ideas about virtue into action, and make choices with long-term benefits.
Courage, temperance, justice, and wisdom—are four powerful principles for guiding our decisions. 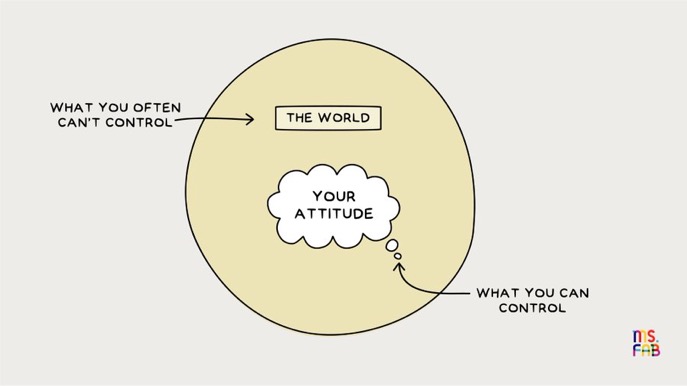 It’s hard to grasp the benefits of virtue without concrete examples, that’s what makes stories so powerful, especially classic ones from history. Greek mythology was designed for this specific purpose. You may tell them of Hercules, who chose a life of courage over pleasure and ease. Or Odysseus, who used wisdom to escape dangerous enemies like a cyclops. Many of these stories and movies hold some prolific significance that’s why movie times are good with your family because, With clear examples in mind, it’s easier for kids to understand virtue, see its benefits, and integrate it into their lives. The ancients believed that character is fate,  that is what we are taught when we are young, the lessons we absorb into our DNA, in effect, determine what kind of people we are going to be. If I was trying to explain Stoicism to my five-year-old Yael, I would simply try to convey the most essential piece of wisdom contained inside this robust, complex topic. I’d tell her: “Look, you don’t control what happens to you in life, you only control how you respond.” What do you mean? she’ll likely ask. Here’s what I  mean: remember when your friend was mean to you last week? That wasn’t nice of her, but they’re also wasn’t anything you could do about it. If someone wants to be mean, they’re going to be mean. But after they were mean, you had a choice, Remember? You got to decide whether you were going to be mean back, whether you were going to hit them, whether you were going to run to the teacher and tell on them, or whether you were going to just keep playing and forget about it. I know that seems really simple, but it isn’t. That situation—when someone does something bad to you and you have to decide how to respond —well, that’s life, adults struggle with it too. Even your parents don’t always get it right. Even thousands of years ago the Emperor of Rome, a guy named Marcus Aurelius, struggled with that too. But the better we can get at it, the happier we’ll be and the more fun we’ll have and the less sad we’ll be. You have that power! You can be as powerful as that king was and as powerful as soldiers and heroes and big strong adults are. Why? Because you get to choose how you respond to everything. If you can learn that now and embrace it, you’ll have the best life ever and no one will ever be able to boss you around because you’ll be the boss. The boss of your thoughts, feelings, and decisions. You believe that too, Parenting 101. Or you wouldn’t be so worried about your kids. The reason you send them to the right schools, why you spend so much time with them, and why you analyze and monitor their behavior so closely today is because you know it influences who they will be tomorrow.
Focus on what we control, talk with kids about how they can’t always control what happens, but they can control how they respond. Sometimes, friends decide to be mean—but that doesn’t mean we have to be mean back. For example, instead of lashing out in anger, kids can practice calming down by reciting each letter of the alphabet silently to themselves, they can take a pause and practice temperance and justice. Journaling is an important part of Stoicism, but the Stoics didn’t keep ordinary journals, they didn’t just write down the events of their day and their emotions. Instead, they kept track of their principles and focused on growing their character. Ordinary journals help kids develop self-awareness, but a virtue journal adds an extra benefit and healthy self-criticism. It provides kids with an open space for reflection on areas of growth and improvement as they work to become better people. Sometimes, kids might feel discouraged by the big gap between who they are and who they want to become. That’s why it’s so important to talk about how virtue is like a muscle, It grows and develops over time with constant exercise.

The principles of Stoicism should be taught to every child in my opinion. I want my two beautiful daughters to know these principles because I didn’t in my own time. I was taught talent was finite and things happened for a reason (i.e., not in your control.) Stoicism, self-efficacy, every kid needs it. Stoicism also breads self-confidence and a clear understanding that everyone is different which Intern brings inner peace. Never too early to be exposed to stoicism and its virtues. Especially the concepts and practices of courage and temperance.